By Oakhurst Olives on February 15, 2015 in Local, News, Press Release

Oakhurst Olives, the award-winning olive producer from Tulbagh, has captured the attention of the local gastronomy industry by securing a contract to become the exclusive table olive provider for seafood restaurant giant Ocean Basket.

Oakhurst Olives are situated on Lemoendrif Farm in the beautiful Tulbagh Valley, where the Du Toit family produces a diverse range of premium quality extra virgin olive oil and table olives. Oakhurst’s Kalamata olives outstripped intense competition to be selected as Ocean Basket’s new table olive after an exhaustive sifting process which spanned several months. It is a remarkable accomplishment for the young producer, who only planted its first olive trees in 2004, and testifies to an unwavering commitment to quality and best practice.

The selection is the latest in a series of achievements for Oakhurst Olives over the past few years. The producer’s Delicate Extra Virgin Olive Oil garnered international acclaim at the prestigious New York International Olive Oil Competition in 2014 by winning a gold medal and Best in Class award, while the Oakhurst Extra Virgin Olive Oil received a coveted Absa Top 5 award in 2013. Oakhurst products also boast numerous SA Olive Awards. In addition to its range of premium quality olive oils, Oakhurst also produces natural green olives and Kalamata olives.

The Kalamata olive, with its characteristic dark purple colour, is named after the city of Kalamata in Greece. It is plump and fruity with a distinctive smooth, fleshy texture and meaty taste. Oakhurst Kalamata olives are perfect enjoyed as a snack on their own, and delicious with cheese platters or salads, or added to any warm Mediterranean dishes for extra flavour.

Oakhurst Olives is based in Tulbagh and is a producer of international award winning table olives and extra virgin olive oil.

Franschhoek Olive Route
How Stuffed Olives Are Made 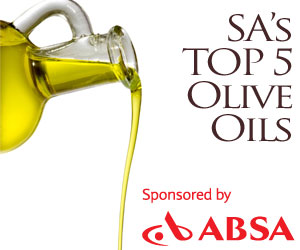